High Stakes Poker returns Dec. 16 with 14 new episodes on PokerGo with 20 of the top cash grinders in the world. Some new faces emerge, but many famous players such as Phil Ivey, Phil Hellmuth, and Tom Dwan will be back in action.

The legendary cash game started during the poker boom in 2006 and was an instant hit. The series ran on the Game Show Network (GSN) until 2010.

♠♠♠ For more on the debut of the eighth season of High Stakes Poker including insight from Phil Hellmuth and Doyle Brunson, click here. ♠♠♠

Ten years after the show ended, reruns and YouTube clips have kept its popularity alive. The high rollers are now back at the table and viewers will be pleased.

High Stakes featured some huge moments through the years – highlighting some of the biggest bluffs ever caught on camera. Viewers also saw how fast a million bucks could swing from player to player with the turn of a card.

With the new season debuting this week, here’s a look at some of the most memorable hands.

Barry Greenstein went toe to toe in this hand for heaps against Sammy Farha. Greenstein is in a dream situation when he gets it all in with his A♥A♣ against Farha’s K♣K♦. 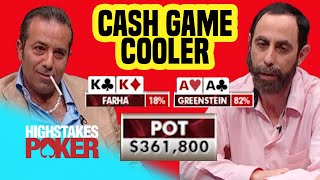 Recently Brad Booth was the center of a missing person case. Luckily Booth was located and confirmed to be okay. Many will remember Booth for one of the most epic bluffs ever against poker legend Phil Ivey.

Ivey held K♥K♦ and Booth did him dirty with 4♠2♠. It is quite memorable hand against one of the biggest names in the game. 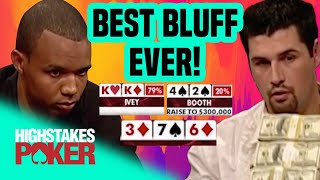 Daniel Negreanu’s 6♠6♥ went heads-up against Gus Hansen 5♦5♣. Both players hit a set on the flop of 9♣6♦5♥. The fireworks began and the pot exploded. Hansen ended up winning more than $575,000 when after making quads on the turn. 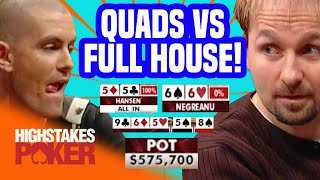 Greenstein had his luck tested again in as he reraised with A♦A♣ preflop. Dwan called with K♠Q♠ and Peter Eastgate with A♠K♥. The pot was already at almost $50,000 before the flop.

The flop came Q♥4♠2♠, creating a giant hand about to erupt. Dwan ended up cracking Greenstein in a $919,000 pot – one of the biggest cash game pots ever on television. 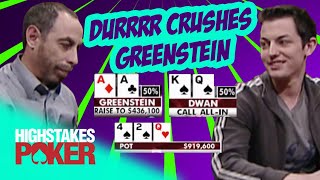 Fresh off of his 2006 World Series of Poker Main Event victory, Jamie Gold appeared on the show. His duel with Patrik Antonius stands out. After an Antonius raised to $4,000, Gold three-bet to $14,000 with K♠K♦ and Antonious called with A♠J♦.

The flop brought 3♠Q♦10♥ and Antonious called Gold’s $15,000 bet. The turn then dropped the K♥. Action kicks up as both players get it all in. The players decide to run the river three times for insurance and Gold sucks out on two of those. 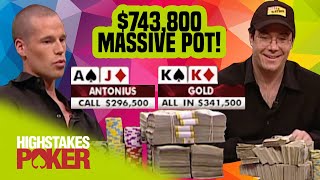 Along with the new season, all the classic episodes can be watched exclusively on PokerGo. Poker fans will see plenty of high stakes action mixed with some trash talk and fun.

“It truly represents a raw, unscripted high stakes cash game,” legendary televised poker producer Mori Eskandani says. “We don’t make the rules, we react to the rules players make. That’s why you will see many cash game situations like running it twice, sleeper straddle, and more in HSP first.”

Here’s an inside look of the new High Stakes Poker set and some things to watch out for.

Take an exclusive, behind the scenes tour of the High Stakes Poker set at the PokerGO Studio with Jeff Platt.