The World Poker Tour announced Tuesday that it had been sold to privately-held investment firm Element Partners. The tour had been owned by Allied Esports Entertainment (AESE) and now Element has purchased the company’s poker-related business and assets for $78.25 million.

The move comes as the tour faced challenges holding live events since the COVID-19 pandemic began. That has left the WPT transitioning into co-branding online tournaments with partypoker in recent months. However, the company recently announced the return of some live events and company officials are bullish on the future.

“Despite the many challenges caused by the COVID-19 pandemic, the WPT business has delivered substantial, impactful results, specifically through its online platforms and services,” Allied CEO Frank Ng said in a news release, “and has made meaningful contributions for the company.”

A look at the purchase details

As part of the deal, Element purchases the WPT for $68.25 million upfront. The remainder of the purchase price comes in the form of 5% of WPT-branded tournament entry fees on “Element-owned or licensed gaming platforms.”

That calls for up to a maximum of $10 million, payable over three years after closing. Allied’s board of directors has approved the transaction, which is expected to close in late January or early February.

That assumes regulatory approvals and the Allied’s shareholders also approve the transaction. In essence, the deal also takes the WPT private and not available to outside investors.

The WPT has grown considerably since its founding in 2002. Today, the television show is seen worldwide by more than 150 million people annually. WPT events are held on five continents, and the company has awarded more than $1 billion in prize money.

Little is known about Element, its plans at this time, or its potential gaming platforms. The investment firm is not affiliated with the growth equity fund of the same name in the energy, water, transportation, manufacturing, food, and agriculture spaces.

WPT officials are expected to announce more about the deal in the coming days. The tour has been a longtime partner with partypoker and it’s unclear as of now if that will be affected by the acquisition.

Despite the pandemic, the tour seems to have done well over the last year. Online gaming has been a big part of that. With the news release mentioning Element’s gaming platforms, the WPT’s online gaming assets may have been key.

“2020 was an exceptional year for WPT’s online and interactive services pillars of its business model,” the company’s news release notes. “With in-person events postponed or cancelled due to COVID-19, WPT’s flagship online subscription platform, ClubWPT, increased new registrations by 61% through the third quarter of 2020, exceeding registrations during the full year of 2019.”

Total subscription revenue for ClubWPT was also up 56% year-over-year during the same time, the company notes. Could Element be hoping to ramp up this part of the business and expand it even more? That remains to be seen.

“I want to thank Frank Ng and the entire AESE management team for its support in allowing WPT to flourish during this period,” longtime WPT CEO Adam Pliska said. “My management team and I are excited about this next chapter and the tremendous new opportunities for the WPT brand and business.”

A history of WPT acquisition deals

Launched on the Travel Channel in 2002, the WPT became the first televised poker show in the US showing players’ hole cards. That was a hit with viewers and the tour played a major role in the game’s growth in popularity in the 2000s.

The WPT expanded through the years and now hosts events around the world. Along the WPT Main Tour, the brand also runs smaller buy-in tours like the WPTDeepStacks and WPT 500.

The company has also ramped up its ClubWPT sweepstakes poker site in recent months. That part of the business continues to expand.

The tour was founded by attorney and television producer Steven Lipscomb and businessman Lyle Berman. PartyGaming (now partypoker) purchased the company in 2009 for $12.3 million.

In 2015, Chinese social gaming company OurGame purchased the WPT for $35 million. In late 2018, the brand was sold again – this time with Berman returning to the business.

His company, the NASDAQ-listed Black Ridge Acquisition Corporation made the acquisition for $50 million. That led to forming the new company Allied Esports Entertainment, which focused on an esports gaming brand as well.

What does the deal mean for poker players?

For poker players, it appears not too much will change but it will be interesting to see what happens. What will Element’s online gaming platforms bring to the WPT brand?

As noted, the company already has deals in place with partypoker for co-branding live and online events. The tour also worked with Zynga on several events and also co-brands tournaments and games on that platform.

Pliska released a video on Tuesday geared toward the company’s partners. Legally, Pliska said he was limited as to what he could say about the deal yet. However, he noted that his management team was still in place and excited about the deal. 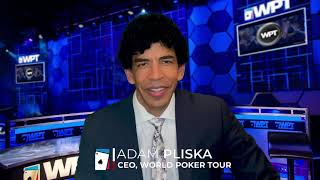 Whatever haooens, many players will be glad to see live poker return on the WPT. The tour recently announced two upcoming events.

The WPT Lucky Hearts Poker Open runs Jan. 22-26 at the Seminole Hard Rock in Florida. The tour is also returning to Las Vegas March 5-9 for the WPT Venetian.

Online players will continue to find WPT events at partypoker as well and the WPT Montreal Online is currently underway. The tour has also already scheduled the WPT Online Series for May on the site.

Players on the partypoker US Network in New Jersey can also probably expect more events. The WPT held its first Main Tour event in the US in December after two other smaller buy-in events. The $3,500 event came with a $1 million guarantee, and ended up paying out $1.2 million.

Next Allied sale could be esports arm

Beyond the WPT, Allied is also considering a sale of its esports business. The WPT deal looks to be a sign of more things to come.

No potential buyer has been identified and there are no negotiations ongoing yet for a sale. Upon completion of the WPT transaction, Allied would proceed under a new name as a publicly traded holding company. But it looks to stay involved with gaming in some way.

Its focus would shift to using its cash resources to explore “opportunities in online entertainment, including but not limited to, real money gaming and other gaming sectors.”

The funds from the WPT sale add to those cash resources as the company looks at other online gaming avenues.

“Due to COVID-19’s impact on the company’s overall revenue generation and profitability timeline,” Ng noted, “we believe the forthcoming sale of the WPT business will garner significant capital and an avenue to determine new opportunities that will deliver accelerated returns for our stakeholders.”