It was a big month with some big wins in June for online poker players in US markets. Players looked to pad their bankrolls before heading to some big summer events.

In the US, online poker is legally up and running in the following states:

♠♠♠ Winner’s Circle offers a recap and highlights some recent action at the online tables. For players winning big online events, please tag @USPoker on Twitter each month to be featured. ♠♠♠

As players head to the World Series of Poker, some chased gold from their living rooms.  Each month WSOP.com offers Online Circuit Series in the combined New Jersey and Nevada markets.

Winning a ring and a bracelet

Pennsylvania online grinder Christopher “IamSmirk” Perkins accomplished a truly difficult feat. He scored a ring and a bracelet in the same month. On June 12, he took down the second bracelet event and won the Online Circuit Main Event on June 26. In total he won over $46,000 last month.

Bracelet winner Jeffrey Dobrin also added a third ring to his collection when he shipped Event 13 for $24,804. That was his second circuit final table of the month.

The Keystone State’s “5betChet” grabbed his second WSOP circuit ring when he out-bet the competition in the PLO event. He won $5,230 for his accomplishments.

Ryan Smith grabbed two rings in Michigan last month. He crushed the series by winning two events, cashing for in over $15,000 for the month.

The $525 Circuit Main Event in the New Jersey/Nevada market is one of the largest online events each month. The tournament had over 500 players in the money but at the end it was Christopher Basile that sealed the deal. This was Basile’s third ring and he won $61,369 for the accomplishment.

In Michigan, Samuel Hamman won his first ring when was victorious in the $100,000 guaranteed championship. He won $21,650 for beating the Wolverine State competition.

Some other Online Circuit winners included:

Some previous winners are ready for the Tournament of Champions. The event caps the WSOP in Las Vegas with $1 million up for grabs for all Circuit ring and bracelet winners from the last year.

WSOP.com award all 2022 bracelet and ring winners, live or online, a ticket for the tournament. The event is set for July 18.

Dire interviewed Blumstein on the Nerdthusiast podcast and then took down Event 69 in the PokerStars series a few days later. 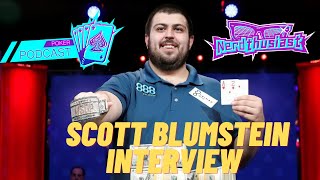 Garden State grinder Jeremy “PokerJermz” Sissman also continues to find success. He won Events 36 and 39, cashing in for over $3,000.

In Pennsylvania, Mark “TonyBluffing” Defelice scored a win in the series. He had a nice return on his $10 investment and won $365 in event 77.

Also in the Keystone state Chris “Realcrazy29” won Event 98 for $2,648.This was his second win of the month after conquering event 14 as well.

In Michigan Kevin “Clockles87” had his biggest win to date after coming up big in Event 96. He scooped $1,805 for the win.

WE DID THE DAMN THING! Super insane heads-up match (took over an hour).

In June, the platform sent satellite winners to the BetMGM Poker Championship at the Aria in Las Vegas. The event featured a $1 million guarantee with the final table streamed from the PokerGO Studio.

Players from New Jersey scored big in the series. Tim Byrne won a $25,000 freeroll after securing a package in an online satellite. Two other players from the Garden State also landed on the final table.

Michael Wang and Felson accounted for over $116,000 between them. Ferguson had won the seat from the online promotional series.

USPoker will update big winners each month in the “Winner’s Circle” feature. Please tag @uspoker on Twitter with your wins.

★★★ Ready to get in the action at BetMGM? Click here for a complete site review with exclusive USPoker bonus offers. Reviews and houses are also available for partypoker US and Borgata Poker. ★★★