The Coronavirus pandemic has put online poker in the spotlight as more players head to the virtual tables. From attention-grabbing heads-up matchups to growing US revenue numbers to added online series, poker has seen a boom not experienced since before Black Friday.

As live tournaments slowly begin coming back, there have been plenty of poker headlines. Here’s a look at some of those poker news and notes.

With the World Series of Poker Online concluded, the showdown between Daniel Negreanu and Doug Polk continues to take shape. After years of bad blood, the two are heading to the online tables for their own high-stakes duel.

Negreanu once again Tweeted out some caveats for the matchup recently with Polk responding. It seems the fine print is getting finalized and here’s a look at what has been agreed to so far:

The only hiccup has been the poker site to play on. As a GGPoker ambassador, Negreanu requested GGPoker play money tables. Polk took exception with that however.

“I would prefer to play on real money tables on a neutral legal site,” Polk noted on Twitter. “I think WSOP.com makes the most sense for this.”

It seems this is a detail that can be worked out. Negreanu played all summer at WSOP.com as part of the online bracelet series.

Polk also requested one added stipulation: a neutral party on site with each player. The idea is to monitor the integrity of the game with no outside parties assisting.

No date has been announced yet, but it appears the duel is definitely going to happen. It should be some added publicity for poker and the online game.

Hellmuth, Esfandiari back for Round 2 of High Stakes Duel on PokerGO

PokerGO is back again on Wednesday with some live poker via the new show High Stakes Duel. The first episode debuted on July 30 with Phil Hellmuth and Antonio Esfandiari ponying up $50,000 each.

Hellmuth came out on top in that round, and now Esfandiari has used his option for a rematch. The stakes double with each round with the potential to win $12.8 million by Round 8.

The first episode made for entertaining viewing and was filmed in the PokerGO Studio in Las Vegas. However, the show experienced technical issues and the service had to post the show to YouTube channel a day later.

Those issues are expected to be resolved and the show will stream on PokerGO as well as YouTube and Facebook. Here’s a look at the “weigh-in” with action beginning about the 2:20 mark. 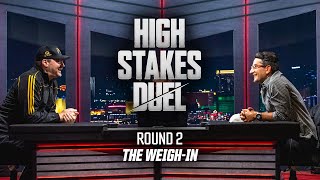 With the WSOP Online wrapped up at WSOP.com and GGPoker, one last bracelet remained to be awarded. The WSOP announced in May that the Global Casino Championship would be held at WSOP.com because of the Coronavirus pandemic.

The event caps the WSOP Circuit and has been held at Harrah’s Cherokee in North Carolina the last few years. The change meant players who qualified during the season could play online in New Jersey or Nevada. The tournament came with a $1 million guarantee and players qualified the season by:

Seven players opted to buy in, bringing the player pool to 130 players for a $1.1 million prize pool. The tournament was held on Sept. 13 and AJ Kelsall cashed in for his first bracelet and $275,632.

A golf pro from Lutz, Florida, Kelsall has three WSOPC championship rings and $1.7 million in live tournament winnings. He described the win to WSOP.com as “a dream come true.”

As to whether the live WSOP gets played this fall, that remains to be seen. The series has been officially postponed to the fall but no updates have been announced.

The new WSOPC season would have already been underway as well. The lack of live poker has been a boon to online poker. Some live poker tournaments have slowly begun returning, but the WSOP presents some unique issues.

The series attracts thousands and thousands of players, not conducive for today’s pandemic environment. So far, it’s simply wait and see for the series.

In the meantime, WSOP.com has seen huge fields throughout the pandemic. The site is currently running the 50 Anniversary Series.

The site is fresh off a successful Micro Thunder Series, and the Sunday majors also continue to attract big numbers. On Sept. 20, Indiana’s “Hollarguy” took down the SC110 Sunday Teaser for SC5,095. The event comes with a SC25,000 guarantee and attracted 264 entries for a SC26,400 prize pool.

The World Poker Tour’s ClubWPT sweepstakes poker site has also received a boost during the Coronavirus pandemic. On Sept. 15, the tour announced a partnership with the Poker League of Nations (PLON) for a series of freerolls.

PLON is the largest women’s poker group in the world with 6,800 members from 25 countries. The group’s goals include camaraderie, education, philanthropy, and promoting women in poker.

ClubWPT will offer members exclusive freeroll tournaments in October. The events feature cash and prizes awarded and there is no purchase necessary to play. Here’s what to expect:

“The World Poker Tour is delighted to partner with Poker League of Nations on this exclusive freeroll series on ClubWPT,” said Jeremy Clemons, WPT vice president of Online services. “WPT and PLON share a common goal of growing the game of poker and PLON’s work over the years to increase participation from women around the globe has been tremendous.”

The poker world lost the fun-loving Darvin Moon on Sept. 19. Most poker fans will remember Moon for his huge run in the 2009 WSOP Main Event.

A self-employed logger from Oakland, Maryland, Moon finished runner-up for $5.2 million. That Main Event was his first-ever trip to Las Vegas and first time on a plane. He certainly made it count.

The best person I ever met through poker is Darvin Moon. A man of integrity and honor. And quite possibly the most interesting person I’ve ever known. Truly. He and his wife Wendy became good friends. Sadly, Darvin succumbed to complications from surgery today. He’ll be missed. pic.twitter.com/oq0DmL74Jk

The Mike Postle alleged cheating scandal seems to have reached a bit of a conclusion. About two-thirds of players affected have settled with the owner of Stones Gambling Hall.

A California judge already dismissed a suit against Postle. Under state law gambling losses can’t be recovered in court. However, the June ruling said plaintiffs could sue the property owner, Kings Casino.

That suit was settled in August. Terms of the agreement weren’t released and some not part of the agreement may continue with legal options. However that turns out, Postle appears unlikely to face any legal ramifications.

“Unfortunately, no matter how clear-cut the case seems to the poker community, there turned out to be little legal recourse, Online Poker Report notes.

This might bring a close to one of poker’s latest cheating scandals, although it may not have concluded the way many players hoped.