Daniel Negreanu’s history of coming up short of World Series of Poker bracelet number seven added another chapter on Monday. Negreanu fought hard for his first bracelet in Las Vegas since 2008 but settled for third-place in the $1,500 Eight-Game Mix event. The amount earned by Negreanu isn’t worth mentioning. Pride and bracelet bets are the sole driver for Negreanu at this stage of his career.

Painful end to a good run

Three-handed play in the $1,500 Eight-Game opened with Negreanu a favorite over relative unknowns Philip Long and Kevin Malis. As a result of making his fair share of second-best hands per the WSOP.com live updates, Negreanu fell flat before reaching heads up.

The summation of the final few hours of Negreanu’s tournament was his elimination. Negreanu lost with king-four against the pocket kings of Malis when Negreanu held two pair versus a set.

He came up short of the ultimate goal but the result is Negreanu’s first cash of the summer and perhaps a sign of more deep runs to come. 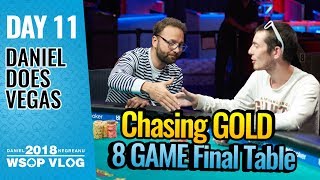 Not the first time

The Eight-Game Mix event proved once again how strong Negreanu is at tournaments with variations of all the games. In 2017, Negreanu made final tables in No-Limit Hold’em, Omaha Hi-Lo, H.O.R.S.E., and Eight-Game when he placed fifth in the $50,000 Poker Players Championship.

Negreanu won the $2,000 Limit Hold’em event for his fourth bracelet and looked like a lock to join the exclusive club of double-digit bracelet winners soon after. A bracelet won in Europe and Australia in 2013 brought the total to six, but more glory has eluded Negreanu despite multiple chances to add hardware.

Eight podium finishes between the 2009 WSOP and 2018 for Negreanu all come in different formats. Most notably, Negreanu took second in the Big One for One Drop in 2014 to earn his largest career score of $8.288 million.

Oddly enough, all of Negreanu’s losses in heads-up play in the 10-year span are to multi-bracelet winners with the exception of Dan Colman in One Drop.

Negreanu was on the short end of Abe Mosseri’s third bracelet win last summer. Before then, Paul Volpe got the better of him in 2014 in the $10,000 2-7 Single Draw event when Volpe won his first bracelet. The year before, Eli Elezra took down the $2,500 2-7 Triple Draw tournament at Negreanu’s expense. When Negreanu was heads-up in the $2,500 Limit Hold’em Six-Max in 2009, Brock Parker defeated him.

A tweet from Negreanu on June 9 provided the first proof of the summer of bracelet bets. Phil Ivey’s play this summer is not yet confirmed to be motivated by such wagers but Negreanu put himself out there with a high entry point.

The only two folks to make their intentions known to challenge Negreanu in the bet are Lauren Roberts and Henrik ‘hhecklen’ Hecklen.

Before the summer, Negreanu announced he would play WSOP events over high roller offerings available at ARIA. He’s holding true to his word and the added financial incentive will keep him at the Rio through the end of the summer.

When is the next chance?

Assuming Negreanu holds true to his published schedule, there are more than enough tournaments for him to make another Day 3 in. The first is the $10,000 H.O.R.S.E. which starts on Tuesday. Negreanu placed sixth in the same event in 2017.

The most prestigious event for the mixed game players arrives on June 15 when the Poker Players Championship opens for the first of five days.

The Super High Roller Bowl offered a first-hand look at Negreanu’s improved no-limit tournament game which gives him an edge for this year’s Big One for One Drop and the seven other NLHE events on his calendar.

Will Negreanu finally take home his long-awaited seventh bracelet by the time the summer ends? He has every intention of making that a yes.