Daniel Negreanu is no stranger to making news in the poker world. One of the biggest faces in poker recently took to Twitter with bracket-style polls of some in the poker media.

The subjects have ranged from podcasts to televised event hosts and play-by-play commentators and analysts.

“The point of these polls will be to showcase some lesser-known podcast hosts, have a little fun with it, and narrow it down to your absolute favorites,” Negreanu noted in a Tweet. “Some of the numbers will be lopsided. And that’s okay folks. It’s just a poll.”

The polls brought a nice reception from some poker players and fans. Others were critical and wondered if they were mean-spirited and unnecessary.

Reaction from players and fans

The polls began on Aug. 13 when Negreanu asked his many followers which poker analyst they enjoyed most. Surveys would continue in the coming days with from 4,000 to 5,000 followers weighing in.

Over the next week or so I’m going to run some polls on the different voices of poker and who you most enjoy listening to. They will be split into three categories:

Polls will be head to head

As an anchor for PokerGO and other outlets, Jeff Platt in was one of Nagreanu’s polls but lost handily to Lon McEachern. The poker host from Texas seemed to take the loss to the legendary voice of the WSOP in style.

Which of these two lead anchor/play by play commentators do you most enjoy listening to?

Hahaha, thanks for the kind words!

Which of these two color commentators do you most enjoy listening to?

Only four that I felt truly belonged in this category so this is the finals matchup:@GabeKaplan vs @NormanChad

Many players took some time in analyzing and explaining their selections. Regular poker host and analyst Maria Ho won handily in her matchup over David Williams.

“Maria Ho!” one commenter noted after voting. “She seems a little more analytical and has opinions prior to action, not an armchair quarter(back).”

“Real tough one,” another commenter noted. “I like both of them a lot. They both work with everyone very well and there is no evidence of self promotion with either of them, which is kind of hard to find in sports commentary these days.”

Not all followers and poker players were keen on the polls and showed their displeasure on social media. Some, including frequent Negreanu critic Doug Polk, believed the polls are merely popularity contests and mean to those who lost.

“I just want to thank Daniel Negreanu for being brave enough to stand up and do the right thing,” Polk Tweeted on Aug. 16, “which apparently is non-stop Tweeting popularity contests about your friends to 471,000 people every few hours.”

Polk followed that up on Aug. 22 with a video about the subject on his popular YouTube channel. The video received more than 143,000 views as of Tuesday. 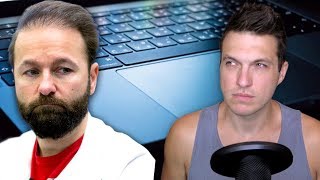 “Many people felt like this was over the line, totally irrelevant, and also was just angering people,” Polk notes about the polls.

The polls serve to promote Negreanu’s popularity and image, Polk argues, as well as his friends in the industry. The contests even produced some criticism from those who were in them.

“These polls are so lame, pitting commentators against each other are for the birds,” longtime player and commentator Nick Schulman noted in a reply to a poll in which he was featured.

A look at the polls and the growth of poker media

Whether one likes them or not, Negreanu’s polls offer an example of the expanding world of poker media. The game’s growth over the last few years has not only been good for many poker tours and players, but also media.

The WSOP has expanded coverage in recent years with ESPN and PokerGO. The World Poker Tour continues adding stops around the world and recently signed a major expansion into Latin America.

This has fueled a growing pool of live reporters, broadcast personalities, writers, photographers, and more. The debate may continue about the Twitter polls, but Negreanu said they were meant in fun and he didn’t regret them.

Lots of people are bothered by these polls so I’m over it.

The podcast host polls will happen next week in an effort to help promote a wide variety of smaller poker podcasts you may not have heard of and enjoy.

“I didn’t see any harm, and I still don’t, in doing a poll asking poker fans who they enjoy listening to,” he noted on Twitter. “If this caused someone pain, then that is more about their personal insecurities than any issues with doing ‘who is your favorite’ polls.”