The Super High Roller Bowl is always a highly-anticipated event in the poker community. The $300,000 buy-in event provides players and fans alike a front row seat to the outstanding level of play from their favorite high-stakes players.

The event scheduled to play out from May 27 to May 30 and is once again being held at the Aria Resort and Casino.

The 2018 Super High Roller Bowl will be consist of 48 players, 18 of which will be reserved for 18 VIP guests. The other 30 seats will  be determined by a lottery of players who register for the event.

The Super High Roller Bowl is officially opening registration on March 1. As an open event, any player may register for the tournament with a $30,00 non-refundable deposit.

You can expect the event will sell out, once again and will do so very quickly.

“The Super High Roller Bowl is the world championship of high stakes tournament poker,” said Sam Simmons, vice president of content at Poker Central in today’s announcement on the Poker Central website. “We sold out in seven hours last year, so players will need to get their deposits in quickly. We look forward to bringing together poker’s biggest stars.”

Looking back at the Super High Roller Bowl 2017

Last year, the Super High Roller Bowl registered 56 players for the five-day event that saw Christoph Vogelsang as the last man standing and earning $6,000,000 for his win.

Vogelsang battled Jake Schindler heads up and capped off a come-from-behind win by making a bold call against Schindler’s bluff.

Here’s a breakdown of the 2017 Super High Roller Bowl field that included 55 of the biggest names in poker and one Kevin Hart. 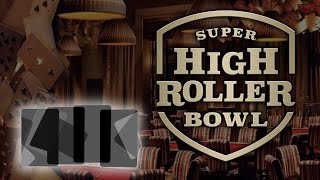 What to expect at the 2018 Super High Roller Bowl

If the Super High Rowl Bowl sells out like it did last year and all 18 VIP guest seats are assigned, the tournament stands to post a $19,800,000 prize pool.

You can expect to see a similar lineup as last year, and it’s highly likely Vogelsang will be on hand to defend his championship, along with all the legendary names that makes the high-stakes event so much fun to watch.

How to catch the Super High Roller Bowl action

PokerGO will live stream the action from the “shuffle up and deal” until the final river card is dealt.

Additionally, NBC Sports Network will feature edited episodes of the exciting action throughout the year.

Whether playing or watching, the clock is ticking. If you plan on playing, mark your calendar to get your deposit in on March 1.

And if you want to watch, you can catch all of the action on PokerGO.