This is Part 1 in a series of Top 5 lists leading up to the 2018 WSOP Main Event. Be sure to look out for the remaining articles every day until the Main Event kicks off on July 2!

The bad beat. It’s the story you simply don’t want to hear.

Everybody has got a good bad beat story and, honestly, nobody cares. But, as poker players, we listen to them because anyone who plays the game can, at the very least, empathize.

The very worst of the bad beats come in the biggest events and there’s no bigger event than the World Series of Poker Main Event.

It would be impossible to detail out the worst Main Event bad beat of all time. With tens of thousands of players getting dealt hundreds of thousands of hands over the course of all previous Main Events to date – just about everything that could happen in a poker hand has happened in the Main Event.

So, while we’re sure that the hand that ended your most recent tournament was the sickest of coolers, we’ve composed a list of some of the most disgusting, filthiest, vicious beats to ever be seen in the Main Event. Look away…if you can. 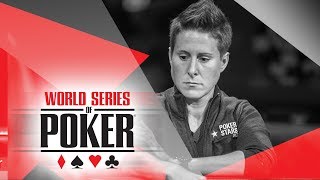 It was early on Day 1B of the 2017 Main Event. Three of the best poker players on the planet — Vanessa Selbst, Gaelle Baumann, and Noah Schwartz — take a flop on the televised featured table. While Schwartz flopped an inconsequential jack-hi flush draw (which he folded), both Selbst and Baumann each flopped a set. Set over set, usually one of the fastest ways for someone to go broke.

Selbst binked the flopped top set of aces while Baumann’s hit a middle set of sevens. The dealer then casually ripped off the last seven in the deck on the turn. Selbst checked her full house to Baumann, who now had quads and bet to build the pot. For those watching, the writing was on the wall. Selbst check-raised Baumann on the turn and then, after betting the river, got shoved on by Baumann. Selbst fell into the tank, but with only one hand, quad sevens, beating her aces full, she was forced to call.

“I wanted to fold, I really did,” Selbst said in the aftermath. A hand like that could send just about anyone into poker retirement.

Day 8 of the 2010 World Series of Poker Main Event found Italy’s Filippo Candio engaged in a big stack battle with poker pro Joseph Cheong. Cheong, holding aces, three-bet Candio preflop and Candio came along with his suited five-seven. The flop brought Candio bottom pair on a paired board, he decided to check-raise Cheong’s continuation bet. Cheong, having way the best of it, three-bet shoved the flop and with the pair of fives, Candio called it off hoping to have picked off a bluff. Nope.

Candio, in poker jail, headed to the back rail to hang his head and watch his fate. An eight hit the turn. The crowd swooned. Cheong sat stone-faced. The river brought out a four providing Candio a straight, the winning hand, and a reason to lose his mind.

Cheong, however, would prevail and rebuild his stack, eventually outlasting Candio at the final table. Candio survived to finish in fourth place for over $3 million while Cheong made it to 3rd for roughly $4.1 million.

In the 2005 WSOP Main Event, poker legend Jennifer Harman flopped top set with pocket queens against Cory Zeidman’s flopped straight on one of the wettest boards possible. Harman bet her set and, after being raised by Zeidman on the flop, Harman called.

The turn was an action card, the ten of diamonds. It paired the board, giving Harman a full house and adding the open-ended straight flush draw to Zeidman’s already made hand. Harman checked, Zeidman bet, Harmon check-raised and Ziedman knew he was no longer ahead. He was going to have to make a decision for his tournament. He called with no knowledge that he literally had only one out headed to the river.

The savage seven of diamonds peeled off the top of the deck on the river giving Zeidman the straight flush and, while not busting Harmon on this hand, crippling her. In the end though, Zeidman was unable to turn that stroke of luck into a Main Event payday.

Matt Jarvis put Michael “The Grinder” Mizrachi to a tough decision in the midst of the 2010 final table. Jarvis shoved his final 13 million chips in the middle with pocket nines. Mizrachi, never one to pass up a spot, made the huge call holding a suited ace-queen.

With all the cards on their back, Jarvis was a slight favorite for his tournament life. Then, one of the most ridiculous hands of any final table played itself out.

The flop saw a queen in the window and one in the door, giving Mizrachi a massive lead in the hand.  Jarvis, taking it in stride, nodded, understanding that the end was near. But when the turn brought one of the two remaining nines in the deck, the room exploded. The tables had indeed turned with Jarvis taking nearly the same lead on Mizrachi that Mizrachi had over him on the flop. Mizrachi was now looking for help with only 7 outs to save him from the brink of extinction. The ace from space smacked the river, retaking the hand for Mizrachi and crushing the tournament life of Matt Jarvis.

Perhaps one of the most brutal hands of all time occurred on Day 1 of the 2008 WSOP Main Event. Tank-top wearing Justin Philips was facing off against Motoyuki Mabuchi who had flopped a top set of aces. The turn brought the ten of diamonds, giving Philips, who was holding the king-jack of diamonds, a straight with a redraw to a straight flush.

The ESPN cameras caught the action as the improbable ace of diamonds hit the river giving Mabuchi quad aces. But as one can guess, that was no good as the same card completed the royal flush for Phillips.

Mabuchi bet, Phillips raised and then, Mabuchi with an aggressive splashing of the pot literally shipped every chip into the middle by shoving his stack and shouting “gamble!”

Both hands were tabled and Phillips seemingly could not believe what his opponent turned over. Quad aces fall to the royal flush in what could possibly be one of the most disgusting coolers of all time.