The World Series of Poker came to a close on Tuesday after almost eight weeks of action. The late action included a major push from Phil Hellmuth in an attempt to earn the Player of the Year title.

That didn’t happen as Josh Arieh turned his WSOP double-bracelet performance into a POY title. Several other big names made some nice runs late in the series. Here’s a look at some of the action from the last week.

After David Moses was laid off in 2020, he turned to poker to keep some money rolling in. That decision led to a WSOP bracelet in this event and a score of $888,888.

Brian Hastings joined the five-bracelet club with a win in this event. He earned $352,958 for his efforts after entering the final day of play fourth out of the final four in chips.

Florida’s Jerry Wong was looking for his first bracelet, but finished runner-up for $72,868.

North Dakota’s Chad Himmelspach came out on top in this event, earning $270,877 and his first bracelet. He caught fire late in the final table, eventually holding 75% of the chips in heads-up play.

This quick-play freezeout event saw a field of 307 players for a $2.9 million prize pool. Romain Lewis, of France, broke through with his first bracelet and $463,885.

The win comes after numerous big runs at the series over the last few years. India’s Aditya Agarwal finished runner-up for $286,705. The tournament saw 307 players for a $2.9 million prize  pool.

The Brazilian poker scene continues to grow and has seen some big finishes recently in poker tournaments online and live. Paulo Joanello took the win in this event for $321,917, scoring his first bracelet in his fourth WSOP cash.

A host of big names jumped in the lowball action with Benny Glaser winning $274,693 and his fourth bracelet. Minnesota’s Everett Carlton finished runner-up for $169,773.

The tournament produced 109 entries for a $1 million prize pool. Glaser brought plenty of positivity after the win.

I got the win!! 😁🥇
I'm genuinely so happy. It's amazing 😊
And it's been an incredible series!
Thanks for all the love everyone, it seriously means a lot! ♥️ pic.twitter.com/SXzrJ72ipl

This new event is meant to celebrate the Poker Hall of Fame and included the induction of poker legend Eli Elezra. All members of the hall received a freeroll and each came with a bounty equal to the year they were inducted.

Ole Schemion, of Germany, scored his first bracelet and $172,499 and only his second WSOP cash. This adds to an impressive poker resumé with $16.6 million in live tournament winnings.

This six-handed Omaha event featured two players from the UK battling heads-up for the title. In the end, Robert Cowen scored his first bracelet for $280,916.

His countryman Robert Emmerson took runner-up for $173,613. The tournament attracted 496 entries for a $1.3 million prize pool.

Another one of these deepstack events produced yet another nice field with 1,921 runners for a $1.4 million prize pool. Poker pro Jason Wheeler scored the win and his first bracelet for $202,274.

He defeated Colombia’s Julian Velasquez heads-up for the title, with the runner-up winning $202,274. For Wheeler, the win comes after a few deep runs at the series through the years including some runner-up finishes.

“My first time I got heads-up for a bracelet was in 2009 and at the time I didn’t truly appreciate what it was at the time because it was my first series you know,” he told WSOP.com.

“It was so long ago, it takes so long to be back heads up for a bracelet. I played almost every event that was on the series. I have been working hard and it feels good to be validated and play well.”

A host of high rollers ponied up six figures for a shot at this bracelet. Poker superstar Adrian Mateos (pictured in lead image) grabbed his fourth bracelet for $3.3 million.

Ben Heath, of the United Kingdom, finished runner-up for $2 million. The tournament brought in 33 players for an $8.2 million prize pool.

Spain’s Leo Margets won her first bracelet in this event. She also became the first woman of the series to win a bracelet.

Plenty of attention was paid to this massive final table that saw Phil Hellmuth and Daniel Negreanu among the final three.

Hellmuth was looking for his 17th bracelet and Negreanu hoping for his seventh. One hand between the two even left Negreanu knocking over his chair. 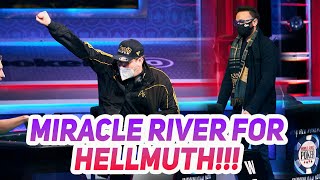 Neither player was able to secure the title however. Instead, Jeremy Ausmus took the top spot for $1.2 million and his third bracelet. This is his second bracelet of the series after winning the $1,000 COVID  Relief Charity event for $48,687.

The tournament brought in 85 entries for a $4.1 million prize pool. Hellmuth scored his second runner-up of the series for $734,807, but was frustrated by not adding bracelet No. 17.

Despite not scoring the win here, it was an impressive series run for Hellmuth. He won his 16th bracelet and made seven final table appearances.

How do I throw these shoes away?!? I made 7 @WSOP Final Tables wearing them!! Can’t keep em forever, they are pretty worn down, I guess it’s time… pic.twitter.com/aIF60LqytI

More big buy-in action returned to the Rio with Mikita Badziakouski, of Belarus, taking his first bracelet. He won $1.5 million with Georgia’s Ren Lin taking the runner-up for $903,610.

Some poker heavyweights made the final table including Negreanu, who took third for $661,041. Despite not winning a bracelet, Negreanu had a nice series with two third-place finishes and several final table appearances. This event attracted 113 players for a $5.4 million prize pool.

North Carolina’s Andrew Wilson took runner-up for $99,742. McCauley had planned to play in a $2/$5 cash game but jumped in the Super Turbo at the last minute. That proved to be a wise decision.

Once again Michael Addamo showed his skills in major high roller events. The Australian scored the title for $2 million and adds to a growing poker resumé.

The event brought in 64 entries for a $6.2 million prize pool. Kevin Rabichow, of Illinois, took runner-up for $1.2 million.

This is Addamo’s fourth bracelet and second of the series. He took down a $50,000 high roller earlier in the series as well for $1.1 million.

This tournament officially closed out the series with Bulgaria’s Boris Kolev taking the tournament for $511,184.

He topped a field of 531 entries that produced a prize pool of $2.4 million. Israel’s Uri Reichenstein finished runner-up for $315,936.

Event 9 brought the $777 Lucky 7s with Bulgaria’s Yuliyan “Dr.Feelg00da” Kolev taking the title for his first bracelet as well.

Player of the Year race ends with Arieh on top

The race for the top spot in the POY race has officially wrapped up. Josh Arieh scored two bracelets this fall and several deep runs to take the top spot.

Despite a ferocious finish, Hellmuth came up short to take second with Negreanu in third. The winner earns $15,000 with $7,500 for second and $2,500 for third. Here’s a look at the final standings.

★★★ Looking to get in the WSOP.com action? Click here for a complete site review and exclusive USPoker bonus offers. ★★★