The new documentary Poker Queens has a simple premise – to highlight female poker players and bring more into the game. The film follows the best female players and details some of the history of women in poker.

Writer and director Sandra Mohr began the project after falling in love with poker herself. Hardcore poker fans may find some of the explanations of the game overdone. But that’s not necessarily the target audience as the film caters to those outside the game as well.

“I also wanted to inspire women to play by demystifying the game, and showing them what can be accomplished,” Mohr told USPoker. “This movie is so different, not a typical slow moving documentary.

“As a film editor, I understand the need for stimulus on a cognitive, visual, and sensual level, and this movie is packed with a lot of great images, compelling theories, and even subliminal sensual overlays. It’s fun, inspirational and fresh.”

Deep dive into the world of women in poker

Poker Queens covers a wide range of topics from the Old West to the modern game. The film includes interviews with numerous women, and a few men, to weave a tale of women in the game. Many might know the backstories of male players like Daniel Negreanu, Phil Hellmuth, and even Wild Bill Hickok. But Poker Queens sheds some light on how some of the game’s women began playing.

The film also functions as a bit of a primer on playing the game and adds context on subtleties like bluffing. Mohr hopes that leads to some women getting in the game.

“I’d like to inspire women to play poker, and men to understand the female player better,” she says. “This movie was a labor of love. I am entirely in love with poker and I hope it shows in this artistic creation through film.”

Going undercover to play as a man

There are some surprises for viewers of the film. Mohr reveals herself as the author of the book Black Widow Poker. She wrote the book after disguising herself as a man to see the difference in how she’d be perceived at the tables.

Mohr notices men tended to fold much more to her raises when she was disguised as a man.  The experiment even led her to attempt playing the WSOP Main Event as a man. 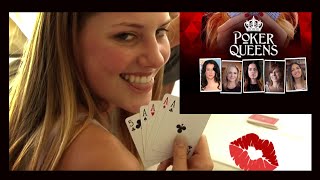 The footage of Mohr playing in various events as a male is particularly interesting. The film offers her first-hand accounts of actually adjusting to life as a male. She doesn’t always find it easy and the gender experiment is interesting beyond poker.

“It’s hard sometimes to play as a man because you’ve got to remember not to do things like a girl,” she says in full beard, sunglasses, and hat as she exits a casino. “When they brought my Coke, I’m grabbing my straw like a girl.

“Another thing I did too, as we were walking up to the door to leave for a break, I paused and let the guy in front of me open the door for me. Because that’s what I’m used to.”

The goal of adding more women to the poker ranks is a practical one for many in the industry. Adding females grows player and prize pools. In addition, televised poker tours are always looking for more viewers – females included.

While women make up only 4-6% of an average tournament field, World Poker Tour Vice President of Global Tour Management Angelica Hael notes that female viewers make up 25% of WPT viewership.

Those playing on the tour’s online sweepstakes poker site ClubWPT also number about 25%. However, getting those poker fans into a live setting has been more difficult. The WPT has stepped up its outreach efforts to women in recent years.

“One of the primary goals for any commercial organization is retention and acquisition,” Hael told USPoker. “The WPT is no different and increasing the number of women in our ecosystem is of paramount importance.”

Many in the poker world hope projects like Poker Queens help that cause. Hael was happy with how the film turned out and enjoyed taking part.

“It’s a pleasure to view films that celebrate the achievements of women in any field or industry,” she said. “I am both honored and feel privileged to have been involved in this documentary.”

The film debuted in mid-March on Amazon and has received favorable reviews. At least to some degree, Mohr’s film has met its goal of adding more female players. She hopes that continues.

“It’s been an awesome response,” the director says. “So many women have reached out saying they will now try their hand at poker. That’s fantastic. That’s a win for everyone.”