Each summer Daniel Negreanu makes a point of watching the entire Rocky saga. If the poker world is correct, he’ll be playing the role of the famed underdog palooka in his own heads-up battle with Doug Polk.

Many in the poker world aren’t giving Negreanu much of a shot in this High Stakes Feud. USPoker spoke with several players across the poker spectrum for their own insight.

The matchup is set to begin Wednesday, Nov. 4, with the first 200 hands live on PokerGO. The event then heads online at WSOP.com and should add some nice momentum to US online poker. Our selectors don’t give Kid Poker much of a shot and Polk seems to be the clear-cut favorite. Here are some picks from several players as well as their analysis of the matchup. 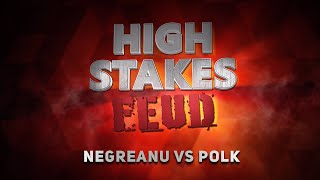 “It’s just a format Doug has much more experience in, which is reflected in the betting lines. Daniel would have to put in a lot of prep work to win this match. If he got out to an early lead I think it would help a lot psychologically and make things more interesting.”

“I think it will be much closer than most people think. I bet $15,000 on Daniel at 4 to 1, and Mike “The Mouth” Matusow bet $10,000 at 4 to 1. Doug is amazing at heads-up NLHE, especially online. However, Daniel is being trained by some amazing coaches. I spent a few hours with these coaches, and they were perfectly aligned with what I thought about heads-up NLHE.

“Then I sent them to my agent, who sent them to Daniel. Daniel worked with them for months. Although I believe they are on to something, because I have won 24 out of my last 25 heads-up matches, I didn’t use these coaches except for a couple hours the day we met.

“There is fundamental math in heads-up NLHE. Two years ago no one knew the right math. Most still don’t. Daniel does. And Daniel has amazing talent, especially when he trusts his instincts. Thus, I’m predicting Daniel will win.”

“My money is on Doug, he’s intelligent and gets tunnel vision when he wants to succeed at something.”

“Doug across the board. For Daniel to succeed, just don’t be afraid to play his game instead of trying to emulate the solver.”

“No one will pick Daniel. Not even Daniel himself.” What could Negreanu do to lose less? “Allow preflop charts and use one himself.”

“Polk is my choice to win. He’s previously been the No. 1 heads-up player in the world and even though he hasn’t played in a while, a match like this makes it easy and exciting for him to get back to study and play. I think his experience of being elite in this format will be very beneficial.”

“Polk is a clear favorite. It’s probably more interesting to say at what odds would I take Negreanu. That answer is probably anything above 5 to 1. As controversial as it is to say, I really like both of these people and what they have done for poker. Personally I’d like to see Negreanu win

“Negreanu is an OG that has invented and adapted to many games, strategies, and styles of poker. He’s someone who is humble and aware enough to know where he stands and smart to know what he needs to do to specialize in anything. Nowadays with programs and coaches a person as skilled, resourceful, and hard working as Negreanu is can hold his own against anyone including Polk. Fortunately, we can bet and get 3 to 1 on our money, which pushed me on the side of Negreanu.”

“Heads-up No Limit Hold’em is a super technical game and not forgiving of imprecision. The specialist has a big edge.”

“At this stage of the game, my money is on Doug Polk to win due to his years of experience in heads-up NLHE. Thankfully it’s not a personality contest though because we’d be looking for a third party to come in and steal the votes as they’ve both been acting like buffoons.”

“I find the whole thing tremendously petty, so not going to give an answer. You can publish I said that though.”

“This feels like the Mayweather versus McGregor fight all over again. Fans may be chanting Polk, but come Round 6 Negreanu pulls ahead and finishes the rivalry on the felt.”

“Sadly, it reminds me of our presidential election. Neither are desirable choices and leave me longing for a viable third party option. I will pick Polk so I am not accused of wasting my vote.”

Poker player and author of bestselling book The Biggest Bluff

“I’m on Team Doug. Heads up was always his strong suit, and he is an online player, unlike Negreanu. As a side note, I took Doug’s heads-up masterclass for Upswing in the months before the 2018 PCA, [PokerStars Caribbean Adventure] when I wanted to work on my heads-up play. I credit it in part with my eventual victory – so I have strong admiration for Doug’s heads-up chops and way of thinking. Sure, the ranges change, but the critical thought process stays the same.”

“I’d say Polk just because he has the online and heads up experience. But I do think Negreanu is good at adjusting and figuring stuff out on the fly, so the longer the match goes the more he gives himself a chance.”

“Polk, but I don’t think it will happen,” he said of the matchup. What can Negreanu do to improve his chances? “Play aggressively but trap in spots. Also deny any outside help.”

A few members of the Catena Media poker team also offered their selections this week. Here’s a look at their analysis.

“Polk. DNegs is good at exploiting average players, especially in a full ring environment. Polk made a career of battling the best in the world heads up.

“Arguments about who is the best overall poker player are meaningless because poker is in fact many different games. However, assuming they’re doing this as a typical heads-up challenge, then Polk is the clear favorite.

“Obviously there’s more variance for poker, so the worse person will win sometimes, but if they played infinitely many hands, Polk would almost certainly come out on top.”

“I’m going with Polk. Online poker is his arena and we already saw Negreanu having multiple freakouts online this past summer and that was only one table at a time. If this was live poker then Daniel would have the edge, but my money is on Polk.”

“I’m going with Polk. Negreanu seems to be in his own head about online poker in general, and much of Polk’s experience is online. Although DNegs is an all-time great, he may have bitten off more than he could chew here.”

“Doug Polk is an amazing player, but I kind of like the underdog just to be different. But I’m not betting a dime.”