The WPTDeepStacks continues offering players plenty of opportunities for some globetrotting as the tour released the first half of its 2019 schedule this week. The schedule features 18 stops in 11 countries along with two WPT500 events and more than $3 million in prize pool guarantees.

The mid-major tour will feature events from Vietnam to New Zealand to Florida on four different continents and features events in the $1,000 to $1,600 range. The schedule outlines tournaments beginning Jan. 11-14 in Berlin through June 13-17 at the Seminole Hard Rock in Florida.

“We are pleased to announce the first half of the 2019 schedule, and provide the 18 events of what will be the most jam-packed six months in WPTDeepStacks history,” tour executive director Chris Torina said. “WPTDeepStacks is poker’s premier mid-major tournament circuit and we look forward to adding some great new events to our long-standing partnerships.”

The DeepStacks began in 2012 and was merged with the WPT in 2016. In recent years, the tour has been adding more international stops as seen by the schedule announced so far.

After the stop in Berlin, the tour will hold its first American stop Jan. 17-22 at the Seminole Hard Rock Hotel and Casino in Hollywood, Fla., featuring a $1,100 buy-in and $1 million guarantee. Last year the event attracted 1,366 entries and a $1.3 million prize pool with New York’s Scott Baumstein taking the title for $223,000.

This year, the WPTDeepStacks launched an Asian swing in Vietnam and Korea and the tour will be returning to Pro Poker Club in Ho Chi Minh City in March. The tour heads to Casino Sochi in Russia in January, which is the first of five events as part of a partnership between WPT and partypoker LIVE to produce tournaments in Europe and Canada.

The first stop in Europe will be in Belgium at the Grand Casino Brussels VIAGE in February. Another highlight is a visit to Johannesburg, South Africa, at the Emperors Palace Hotel Casino in March.

Two stops have also added WPT500 events in conjunction with WPTDeepStacks tournaments: in Barcelona, Spain, in March and Nottingham, United Kingdom, in April. The events offer players a little more bang for their tournament bucks. WPT500 feature events in the $500 price range.

“WPT looks forward to expanding its global reach, and offers players around the globe a chance to play on the World Poker Tour stage at an attractive price point provided by WPTDeepStacks,” said Angelica Hael, WPT vice president of global tour management. “Players from around the globe can look forward to competing for their share of the $3 million in guarantees in the first half of 2019.”

The schedule may include numerous international stops, but there are still seven in the U.S. in Canada. That includes a new $1,500 buy-in addition in May at the Golden Gates Casino in Blackhawk, Colorado. Canadian players will also be pleased to have a couple events – at Montreal’s Playground Poker Club in February and Casino Yellowhead in Edmonton in April.

The tour’s final overseas event is in Auckland, New Zealand, at the Skycity casino May 31 – June 3 and is the second WPT event in the country. The 2018 event drew 360 entries and was the largest tournament ever held in New Zealand. The final tour stop in the first half of 2019 will be in Tampa, Florida, at the Seminole Hard Rock in June, featuring a $1,100 buy-in and $300,000 guarantee. 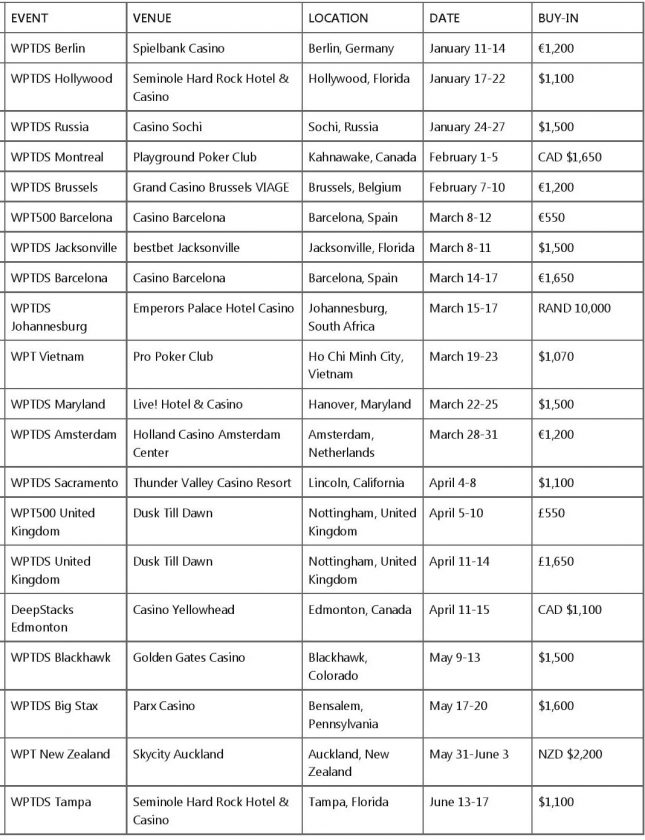