The World Series of Poker in Las Vegas is considered the mecca for the poker world. Since 1970, players put up large amounts of cash to chase gold bracelets. The Coronavirus pandemic changed those this year’s live tournament scene.

However, WSOP.com is holding the first strictly online bracelet series in a partnership with GGPoker. There has been major debate over the changes among players.

Poker continues to be an evolving game and the tournament poker world has transformed over the past 20 years. PokerGO is now offering viewers a chance to look back at some of these series. WSOP Classic runs through July 24. Viewers will find daily, exclusive footage for series from 2003-10.

The beginning of big field poker. The 2000 WSOP was the first time the Main Event saw more than 500 entries. This was a big step from the six contestants who entered in 1971.

This year showed that large tournament fields from the previous year were not a fluke. The Main Event produced 613 entrants. That was the largest live poker tournament ever played at the time.

Also notable was the fact that for the first time in poker history, the 2001 Main Event paid out two $1 million dollar payouts in one tournament. Carlo Mortensen took down the Main Event for $1.5 million and Dewey Tomko took second for $1.1 million.

A new invention called the “hole card camera” changes the game forever.As the name implies, the cameras allow the viewer to see a player’s hole cards. For the first time, others get a peek into the mind of some of the top players in the world.

This inside view has helped launch poker as a spectator sport. The World Poker Tour first used hole card cameras in 2002. The WSOP was late to the party but made use of the cameras a bit in 2002.

2003 – A perfect storm for the Moneymaker boom 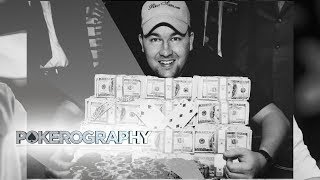 With poker experiencing massive popularity kickstarted by the WPT in 2002, the series was huge on ESPN. Moneymaker’s story from poker amateur satellite qualifier to WSOP champion helped launch the “poker boom.”

The boom also brings the rise of “poker celebrities” like Phil Hellmuth and Daniel Negreanu. Online poker also explodes around the world.

2004 – Change ahead for the WSOP after purchase

Harrahs (now Caesars Entertainment) purchased the rights to the WSOP. The series was created in 1970 by Benny Binion at the Horseshoe in downtown Vegas.

The purchase sets in motion plans to move and expand the festival. Big fields continue as the Main Event goes from 839 players in 2003 to 2,576 in 2004. Greg Raymer tops the field for a $5 million payday.

One of the pivotal moments in the history of the WSOP came when the series moved to the Rio All-Suites Hotel and Casino. More gaming space meant more tournaments with players from around the world finding even more action.

The WSOP Circuit was also introduced allowing players around the country to vie for championship rings.

Chip Reese won the inaugural $50,000 HORSE tournament. The event is now known as the Poker Player’s Championship and is one of the most prestigious WSOP events.

This is also the height of the poker boom, yielding a record 8,773 Main Event entries. Jaime Gold takes the top spot for a record $12 million.

The birth of deepstack poker goes mainstream. In 2007, the WSOP doubled the starting stack of 20,000 chips in the Main Event.

The series also expanded to Europe with a series in the United Kingdom. This was the first time in WSOP history a bracelet was won outside of Las Vegas.

2008 – Building hype for the final table

The controversial “November Nine” begins. The WSOP began suspending the Main Event final table in July. Players are then allowed to train and prepare for a showdown in November. 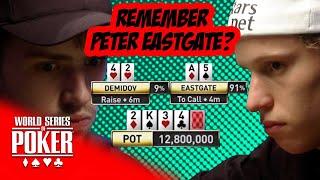 The WSOP eliminated “rebuy” events and later changed to a re-entry style. The series also tripled starting stacks, further adding the concept of deepstack style poker in the series.

With 6,012 entries, the WSOP sets a record for the biggest live event outside of the Main Event. The $1,000 “Stimulus Bracelet Tournament” event was named after stimulus checks Americans received during the economic downturn.

Steve Sung won the event for $771,106 and the event portends more smaller buy-in events to come with massive fields.

The $50,000 HORSE event was changed. The Poker Players Championship became an eight-game style format and has maintained that every year since.

For the first time ever, the final table of the Main Event was shown live in its entirety on ESPN. The entire 55-event schedule was also shown via ESPN, WSOP.com, and ESPN3.com.

A $1 million dollar buy-in bracelet event is organized by Cirque Du Soleil founder Guy Laliberte. The Big One for One Drop had $111,111 of each buy-in donated to the One Drop Foundation, which offers clean water initiatives worldwide.

Poker pro Antonio Esfandiari took the title for $18.3 million.He remains a major name in poker and a frequent ESPN analyst.

In the Main Event, Greg Merson scored the title and $8.5 million. That came after also winning a $10,000 event that summer for $1.1 million.

Sweden’s Martin Jacobson began the Main Event final table eighth in chips but rallied to take the bracelet and $10 million.

The series also expanded for the third time and went down under. The Asia-Pacific WSOP takes place in Melbourne, Australia, and awarded five bracelets.

The event pays out $1.3 million to the winner, New York’s Jonathan Dimmig.

One of those events is the $565 Colossus. This was the lowest-priced event since 1980 and produced a colossal 22,374 entrants. This was the largest live tournament in the history of poker.

Back from the dead, the first tag team event since 1983 is reprised as a bracelet event. The $1,000 tournament proves popular and continues to find a place on the schedule.

The November Nine is no more as the Main Event play resumes in its original format.

Also, for the first time ever online bracelets are offered to players in Nevada. With so many players in town for events, the series hopes the added events give a boost to WSOP.com.

Three events were launched on WSOP.com. Joseph Mitchell, of Las Vegas, became the first online winner after taking down a $333 event for $122,314.

Poker Central also signs a four-year deal with the WSOP to stream live events throughout the series on its PokerGO service. Fans now see more live coverage than ever before.

The “big blind ante” format had been introduced at several casinos over the last year and the WSOP introduced the format into limited events.

Poker Hall of Famer and 10-time bracelet winner Doyle Brunson announces he will be playing his last WSOP event in the $10,00Deuce to Seven Championship. That included a memorable final table appearance.

Multi-flight tournaments have now become a new normal at the WSOP. The Big 50 becomes another huge event to commemorate the series’ 50th anniversary.

The $500 buy-in event becomes the largest live poker tournament in history with 28,371 players.

The WSOP announces that all summer events are postponed to the fall due to the Coronavirus pandemic.

Instead, 85 bracelet events will be offered through WSOP.com and GGPoker. This becomes the first year players outside the US can win a bracelet online.