Poker pro Brian Altman may have been one of the biggest names in poker without a World Series of Poker bracelet. That changed on Sunday when he added some more hardware to his poker resumé via Sunday’s online event.

Some other big names continue making big finishes including the 2021 WSOP player of the year Josh Arieh. Adam Friedman also scored his fourth bracelet in four straight years. A few players from outside the US also found the winner’s circle over the last week.

Two of poker’s biggest names, Daniel Negreanu and Phil Hellmuth, also have had some unique starts to their WSOP summers. Here’s a look at some of the series events from the last week in Las Vegas.

It’s been an interesting start to the 2022 WSOP for Hellmuth and Negreanu. The two finished second and third in last year’s player of the year standings and play deep schedules each summer. But it’s been a rough start so far.

Hellmuth acknowledged some stomach ailments (“traveler’s diarrhea”) right at the beginning of the festival. The Poker Brat also later contracted COVID and has yet to see major action in the series. Several other players have reported coming down with the sickness as well.

More interesting is the revelation Negreanu made last week that someone was trying to extort him. On his weekly vlog, he noted that someone had left a message that he “would go public” with what Negreanu “did to his family” in Lake Havasu, Arizona.

“The whole world’s going to know,” the caller says in the message.

Negreanu didn’t even know where Lake Havasu is and says the person is attempting to extort him. He was considering getting the FBI involved to investigate the case. Subsequent messages seemed to take on a more threatening tone.

“I have no family in Arizona and don’t know what this person is talking about,” Negreanu said on the vlog.

More messages followed that initial message and Negreanu even played some of the man speaking. Here’s Negreanu detailing the case in his own words. 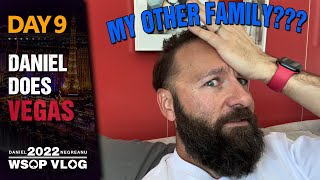 This lower-end buy-in saw 2,392 entries for a $3.2 million prize pool. After starting in the middle of the field on Day 3, France’s Leo Soma worked his way back into contention and scored the title for $456,889.

The big buy-in Omaha action brought out some of the game’s best with 196 entries and a $1.8 million prize pool. That was a record number for the tournament.

New Jersey grinder Daniel Zack scored the title in this one for his second bracelet and $440,757.

In heads-up play, he topped Dustin Dirksen, who scored $272,408 for runner-up. Yuval Bronshtein continued a nice run in the series, notching his first of two final table appearances for $195,203.

Lehner battled some major ups and downs at the final table on his way to victory.

“I don’t have the words for it I think,” he told WSOP.com. “At the beginning I was second in chips but then I was short stacked all the time. So I played very well and I’m very happy that I have this [bracelet] now.”

More lowball action hit the Vegas Strip with New York’s Dominick Sarle scoring his first bracelet for $164,243. The tournament brought in 309 entries for a $687,525 prize pool.

Jerry Wong took second for $101,514. Sarle came close to an online bracelet last summer, finishing runner-up in the Big $500 for $57,857 at WSOP.com. Mostly an online player, he’s ramped up his live tournament play over the last couple years. That paid off on Friday.

These lower buy-in No Limit Hold’em events continue to deliver big prize pools. This one produced 2,663 entries for a $2.4 million prize pool.

Chicago’s Bryan Schultz found the top spot for a $330,057 payday and his first bracelet. Young Sik Eum found the runner-up position for $203,949.

That’s quite an impressive feat in such a major event and he scored almost $1.5 million in the process. The event produced a $6.2 million prize pool and Fabian Brandes finished runner-up for $907,132. Last year’s player of the year, Josh Arieh, took third for $644,365. He continues showing some impressive consistency with two third-place finishes, both for more than $600,000. So far, he’s feeling confident this summer.

It's a third place finish for @golferjosh as he looks for back-to-back @WSOP POY honors. Love how honest Josh is here: pic.twitter.com/4xArUsqfGg

The lowball action continued with Russia’s Denis Nesterenko crowned champion in this event for $108,250. The tournament produced a field of 350 entries for a $467,250 prize pool.

This was the largest win of Nesterenko’s career and his first bracelet, with California’s Von Altizer finishing runner-up for $66,910.

The monstrous action returns for Day 3 after two starting flights and 271 players remaining. The event found a field of 2,947 players for a $3.9 million prize pool.

Reaching the bracelet No. 4 milestone isn’t easy, but Adam Friedman (pictured in lead image, courtesy PokerGO) made some news over the weekend winning his fourth in four straight years. Friedman has a total of five now, but won a bracelet each of the last four years.

The poker pro originally from Indiana has shown plenty of skills in mixed games with three of those four coming in dealer’s choice events. Over the weekend he added the $10,000 Seven Card Stud Championship for $248,254.

Jean Gaspard finished runner-up for $153,433 with Phil Ivey taking third for $108,233. The tournament attracted 95 entries for a $885,875 prize pool. Friedman was pleased to finally break through in the event.

“This is in my top three or four events,” he said afterward. “I have played thousands upon thousands of hours of this game. I have had really bad success in this event over the last several years and to close it out in my first real shot I have had is amazing.”

Poker heavyweight Brian Altman already has three World Poker Tour titles and has now broken through with his first bracelet. In 2020, Altman won an online WSOP.com Circuit ring and grabbed some hardware online again on Sunday.

He bested Eric Salazar heads-up for the title and $68,397. Salazar grabbed $68,397 for runner-up. Altman now has $6.4 million in live tournament winnings.

A look at the week ahead

Plenty of action remains and here’s a look at some of the early-week events:

★★★ Ready to get in the bracelet hunting action at WSOP.com? Click here for a complete site review with exclusive USPoker bonus offers. ★★★