Daniel Negreanu’s World Series of Poker $25K Fantasy Draft is back. On May 31, the fantasy contest returned for the first time since 2019.

The event has drawn plenty of headlines each year with some of the game’s high rollers putting up five-figures sums to compete. The draft saw 14 teams put up $25,000 and draft eight players each.

The draft was held in the PokerGo Studio in Las Vegas and streamed online. Here’s a look at the annual draft and some insight on players selected.

How the draft works

The annual fantasy league started in 2011 and runs like a fantasy football contest. Teams draft their players and each gets a $200 bankroll for an auction-style draft.

Each drafted player must collect as many points as possible throughout the WSOP series. The league awards players that score between first and 18th place in any official bracelet event. 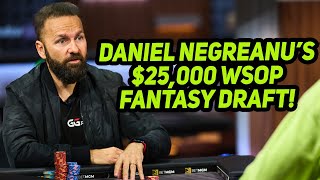 Top bids for the night went to Daniel Negreanu ($111), Shaun Deen ($110), Jaoo Vieira ($95), and Phil Hellmuth ($91). Team owners generally value players who plan on playing a full schedule and also have had success in the past. Fantasy squads were drafted by:

Balling on a budget

A couple of big value grabs were made during the draft. WSOP Main Event winner and multiple bracelet victor Joe McKeehan was a steal for $4.

Another Main Event value grab was Joe Cada for $1. Cada recently won a WSOP Online Circuit ring and has four bracelets to his name. A few other value picks included:

To see the full spreadsheet of picks and teams click here.

A few players went for a low ball price or went undrafted due to the latest in cheating accusations. After major recent controversies, Ali Imsirovic went for only $1.

Bryn Kenney, Chris Ferguson, and Jake Schindler all were snubbed and went undrafted. Kenney and Imsirovic have denied the allegations.