PokerGO unveils the third showdown between Phil Hellmuth and Daniel Negreanu this week. A hefty $400,000 is on the line when the two players return to High Stakes Duel on Wednesday.

Plenty of bragging rights are on the line after Hellmuth took down Antonio Esfandiari in three straight matches and he’s now beaten Negreanu twice in a row.

Negreanu felt he played well in both matches, but lost some steam late in each session. What does he have planned this time around?

“Subtle exploits, but frankly, the strategy has been working except for the actually winning part,” he told USPoker. “I’ve dominated both matches and got unlucky late in both.”

The two players once again appeared on the No Gamble, No Future podcast on Friday. Hellmuth and Negreanu brought plenty of hype to the show.

Negreanu returns to the table after what he described as a frustrating US Poker Open. He said he lost the last 12 all-in hands he played in the series.

Kid Poker will be hoping to turn things around against the Poker Brat this week. Negreanu took some shots at Hellmuth’s ego in analyzing a potential sixth-straight win for Hellmuth.

“We already know Phil Hellmuth, we know he’s got a reasonable ego, if he wins again – beating Antonio and if he beats me – he might explode,” Negreanu said on the podcast. “We may have the big bang theory, a poker version, where his head just shatters.

“We can’t have that. For humanity’s sake, we can’t have Phil win again because there’s no coming back from that.”

Despite the two losses, Negreanu remains confident in his skills and ability to beat Hellmuth. He spoke about reviewing the first two matches to track Hellmuth’s play. That offered some insight, Negreanu said, and he plans to adjust a bit more in the final match. 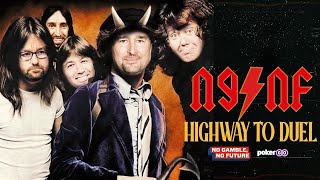 If Hellmuth wins this match, he can cash out and walk away. If Negreanu wins then Hellmuth can challenge again for an $800,000 match. However, Hellmuth confirmed that this match would be his swan song if Negreanu won.

“To me this is just a super important match and there’s a lot of pressure on both Daniel and I because he can’t re-challenge me and I won’t re-challenge him,” he said. “It’s kind of winner take all.

“Daniel’s going to play great in this next match, I have no doubt, so it’s a real challenge.”

In the second match, Hellmuth ran several bluffs, Negreanu noted, which differed from his play in the first event.

On No Gamble, No Future, Negreanu detailed several statistics on Hellmuth’s play. The Poker Brat seemed less interested in statistics but said he did review both matches. Hellmuth seems to approach his game in more of a stream-of-conscious style. He’s less interested in the deep statistics and analysis seen in some recent heads-up challenges.

“I think about poker differently than almost everyone else on the planet, for better or for worse,” he said. “And so, I’ll be thinking about some (strategy) stuff. What specific (things) I don’t know. There’s just so much to playing heads up that I’ve never been able to discuss my heads-up strategy with anybody before.

“I might have talked to a couple of people about poker strategy in the past, but the one thing I can’t ever do is talk heads-up strategy with them because … I feel like I have a pretty good strategy and so until I lose a bunch of times, I’m not sure I want to change.”

If Hellmuth doesn’t return to the High Stakes Duel table, Tom Dwan is expected to be the next player up. USPoker reached out to a couple players to see how they might tackle Hellmuth in a heads-up scenario.

“I would just keep raising his bets post-flop on turns and rivers,” he says. “He’s so trap-happy. It’s tough to weigh enough value into his range.”

“While I haven’t been able to watch any of the matches, I’d guess Phil probably plays too tight in most spots and massively under-bluffs across the board,” he says.

“If I were playing against an opponent like this I’d try to make a lot of exploitative hero folds when he’s putting a lot of money in the pot, and pressure him in spots where he’s playing passively. Who’s got next?”