The World Poker Tour’s first live event of the season is set for June 18-22 at the Seminole Hard Rock in Tampa, Florida. However, the tour’s addition of more online poker events also continues this month with a special high stakes, heads-up event.

The $25,000 WPT Heads Up Poker Championship is an invitation-only event featuring some of the biggest names in poker. That includes Phil Ivey, Nick Schulman, Tom Dwan, Doug Polk, Landon Tice, and numerous others. Superstar DJ Steve Aoki is even making an appearance.

Four-time WPT champion Darren Elias, who recently signed as a member of Above the Felt Entertainment, will also be playing the event. He spoke this week with USPoker about his own involvement in the tournament.

Heads-up live and online events have grown in popularity in recent months. Daniel Negreanu and Polk faced off from November through February in the High Stakes Duel at WSOP.com.

Elias has expressed his own interest in getting involved in a heads-up challenge and now has the opportunity. He’s looking forward to the WPT event.

“I’m excited to play a special invitational event like this, both as a change of pace from regular tournaments and to challenge myself against some of the best heads-up players in the world,” he says.

The Heads Up Championship features 32 competitors and the WPT will live stream all matches. One-on-one poker is a different type of game and recent matches have attracted some major interest online.

“I think big heads-up events like this have been popular because they draw a lot of the more well-known players in poker and can be an entertaining spectacle for fans,” Elias says. “This event in particular has a few streamers and other gamers in the bracket with large followings so that should drive the viewer experience even higher.”

A look at the matchups

The drawing for the first round was held on Monday. Some of the more interesting matchups include:

Elias now finds himself facing a bit of an unknown in his first-round matchup. That means using a more baseline strategy and adapting as he gains more information, he says. What’s his overall outlook on heads-up poker?

“Strategically, heads-up is a very mathematical game with little room for error,” he says. “Because you reach the final stage of multi-table tournaments so rarely, most of my experience has come in heads-up tournaments and high stakes sit and go’s online. 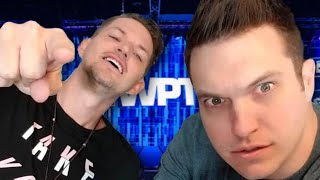 “It’s definitely a different beast and the best play in a given hand can vary a lot with the opponent you’re playing against.”

The online version also comes with some intricacies of its own versus live play, Elias says. If he had his pick, Elias would rather play heads-up in a live setting.

“The online heads-up game is much faster than live obviously,” he says. “I do prefer live for seeing an opponent and watching body language as that can be incredibly valuable and easier to pick up on in a heads-up match versus a full table.”

Having the four-time WPT champion in the field adds some extra cachet to the event. A win would add even more to an already-impressive poker resumé.

“The World Poker Tour is thrilled to have its four-time WPT Champions Club member Darren Elias playing in this event,” WPT CEO Adam Pliska said. “Fans around the globe can look forward to watching Darren play as part of the live stream coverage during this event.”

Along with a host of big-name pros, the event features some other interesting qualifiers and players with unique backgrounds. Elias likes that the tour has added some variety to the field.

Always competitive, he’ll be looking for yet another deep tournament run.

“As a big supporter of the World Poker Tour, I’m excited to participate,” Elias says. “I’ve always felt confident in my heads-up game and think this field will have an interesting mix of top poker players and top gamers from other disciplines to create a unique competitive dynamic.”