Can Phil Hellmuth make it seven in a row? That’s the question many in the poker world are asking as the 15-time World Series of Poker bracelet winner heads into another High Stakes Duel match on PokerGO.

This edition is set for Wednesday and finds the Poker Brat squaring off with Nick Wright, host of FOX Sports’ First Things First. While not a pro, Wright believes he can mix things up in a way that pros might not against Hellmuth.

“Phil has had massive success in this event playing against professionals who clearly think they’re better than him, but now he has to play an amateur who has no such delusions,” Wright told PokerGO. “I am almost incalculably worse than Phil at all forms of poker, most notably this form that he may have mastered. I think that should work in my favor. It might actually throw him off.”

That seems like a tall order considering talented, seasoned pros like Daniel Negreanu and Antonio Esfandiari fell in three straight matches. However, Hellmuth experienced some dental issues earlier this week.

Will the canine conundrum keep Hellmuth from playing his best? Poker fans will be watching to see how things shake out.

A look at the challenger

Wright is no stranger to the poker table or the PokerGO Studio. The two competitors are both part of an upcoming eight-episode Poker After Dark series on the network.

“Phil and I have played before and he thinks he’s picked up a number of physical tells of mine,” Wright said. “Little does he know that I always had this match in mind, and I was just setting him up for the long con. Wait, is he going to read this? Damn it.”

He now takes a big stage facing off with Hellmuth. The current High Stakes Duel champ has already pocketed $700,000 from his wins over Esfandiari and Negreanu. Wright expressed his excitement about battling Hellmuth mano a mano in Las Vegas

“To be serious for a moment, this is one of the greatest honors of my life, to be selected as Phil’s next opponent,” he said. “I’ve made a career discussing the ‘men in the arena,’ as Teddy Roosevelt put it, but I’ve obviously never actually been able to be in that arena myself.

Here’s a look at the complete details on the match: 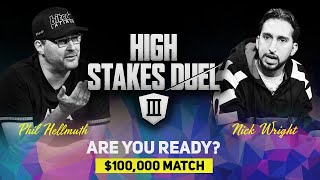 Some dental dynamics entered the match mix on Monday. Hellmuth suffered a toothache over the weekend and saw a dentist on Monday.

“Luckily, the ‘bad infection’ was caught today right before it hit my sinus nerves (it was deep),” Hellmuth noted on Twitter. “I did have to have a root canal, and am taking antibiotics. I’m 100% fine, but I am concerned about those of you in the same boat. If you have any pain, go see your dentist!”

Through the first six matches, Hellmuth has made it part of his routine to dine at the table. That ranged from hamburgers to mixed nuts to Sour Patch Kids.

Plenty of questions come to mind following the dental surgery and with some big money now on the line. Will his PokerGO diet become soft foods? Will his duel diet transition to applesauce and milkshakes?

Any remaining pain might also present a problem. Will this give his opponent a chance to sink his teeth into the Brat? Wright believes Hellmuth may be preoccupied and thesituation offer an opening for his own success at the table.

“My takeaway from this whole thread is that Hellmuth is taking our match so lightly, he’s scheduling major dental surgery just days prior,” he Tweeted. “Sad!”

The action promises for some interesting action with the added element of a rec player at the table. Can Wright stop the streak? His fans will find out soon.