The third annual Global Poker Awards returned last Friday to honor some of the best in the industry from 2021. Ali Imsirovic was the star of the show, not only earning (GPI) Player of the Year but two other awards as well.

The event was held at PokerGo Studio in association with the Aria Casino in Las Vegas.  The event resurfaced after a pandemic-induced absence in 2021 and was hosted by poker personality Jeff Platt. The host did not spare any time opening up the show and added some humor to the event.

“It is good to be back in person,” Platt said. “After 23 months off we are here to celebrate the very best this industry has to offer.”

Some of the biggest winners

“It’s been 23 months of misery, and here we are,” Danis said. “I’m proud to say that we have representation from 13 countries this year, making this truly the Global Poker Awards.”

A big part of the presentation is recognizing the GPI Players of the Year.  Imsirovic came out as the night’s big winner. In addition to the GPI title, he also earned  the PokerGO Tour POY and Player’s Choice for Toughest Opponent awards.

Nadya Magnus also picked up the POY title on the women’s side of the GPI. David Mzareulov, of Azerbaijan, earned the Mid-Major POY award.

Other awards also handed out

Multiple awards were given out throughout the evening and included not only awards for players, but industry personnel and media as well. Some of those included:

The award for Best Poker Vlogger went to Brad Owen. He currently has over 576,000 YouTube subscribers and puts out weekly content. He also recently became part owner of the Lodge Poker Club in Texas.

Veronica Brill earned the Best Charitable Initiative award. During 2021, she worked to fund an handicapped-accessible van for poker player K.L. Cleeton, who actually presented the award.

Brill was appreciative and thanked the poker community at large.

“In poker, we have a lot of conflict,” she said. “Daniel Negreanu and Phil Hellmuth are constantly arguing, Doug Polk versus the whole poker community all the time, but when we really need it most, we come together, and we do what’s right, and we help each other.

Enrique Malfavon took home Photo of the Year for capturing the World Series of Poker Main Event bubble boy. Kevin Campbell was caught wide-eyed and in disbelief when he was eliminated in the biggest poker event in the world.

Here’s a look at the complete list of winners followed by a video of the entire awards presentation. 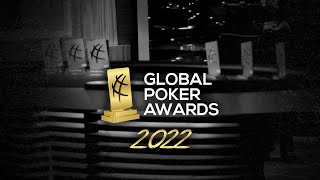