There are numerous challenges for live poker rooms and tournament operators because of the Coronavirus pandemic. Tournaments have been canceled and postponed with televised poker put on hold.

However, online poker has seen record numbers, Twitch poker views are up, and there have been many poker charity initiatives. The World Poker Tour is now getting in the act with a new celebrity poker event on Twitch.

The King’s Celebrity Poker Challenge on ClubWPT debuts Thursday, May 28, at 8 p.m. ET. The event is produced in conjunction with Budweiser and benefits World Central Kitchen. The organization delivers meals to families, seniors, frontline healthcare workers, and more.

Charity online poker continues with major sponsor on board

The WPT series becomes the latest of several charity poker events during the pandemic. That has included a major celebrity event from PokerStars and the Keep the Lights On campaign. Partypoker and GGPoker have also run charity events.

For Celebrity Poker Challenge, Budweiser is donating $15,000 for each of the six players to World Central Kitchen. An additional $35,000 is donated in the winner’s name for a total of $125,000.

With most sports and live poker suspended for months, the event may give fans something to whet their competitive appetite.

From the business side of poker, the event includes a nice sponsor. Budweiser has major name recognition and building partnerships with major corporations hasn’t always been easy for series like the WPT and World Series of Poker.

A WPT sponsor in the tour’s early years, Budweiser has now added its name to another event.

“Budweiser has had a long legacy of an association with competition,” Budweiser Vice President of Marketing Monica Rustgi said in a news release. “We, like everyone else, are missing the excitement of watching a live game. Bud wanted to give people a chance to feel a little of that thrill of competition while staying safe at home.

“So with the World Poker Tour, we’ve assembled a cast of characters for a charity game for some light hearted fun and to make a positive impact by spotlighting the great work of World Central Kitchen.” 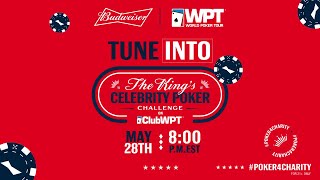 Where to watch and who will be playing?

The two-hour show will be simulcast across multiple channels including the WPT Twitch. The action will also be shown on Budweiser and World Surf League Facebook pages. The first episode features:

As with other WPT programming, anchor Lynn Gilmartin and commentators Tony Dunst and Vince Van Patten will be part of the action.

“WPT is always looking to be innovative, and this partnership with Budweiser leverages our 18 seasons of world-class production and our ClubWPT online platform, to bring real poker into people’s homes during this unprecedented era without live events. We graciously thank our partners at Budweiser for their contribution of $125,000 to help those in need during this time.”