The 12-event series runs through June 15 at the PokerGO Studio and has attracted a host of big buy-in specialists. Plenty of action remains and here’s a quick look at the events so far.

Plenty of big names rose to the top in this event, including a final table with Steve Zolotow and Daniel Negreanu. Those poker heavyweights would take second ($136,000) and third ($88,400), respectively. It was Poker Hall of Famer Elezra taking the championship for $183,600.

For Zolotow, this was his third final table appearance of the series. After leading on Day 1, David “ODB” Baker finished seventh for $34,000.

Elezra has been a favorite among fans for years after appearances on shows like High Stakes Poker. This was his first win since scoring his third WSOP bracelet in 2019. The event attracted 68 entries for a $680,000 prize pool.

Negreanu took to Twitter to note some particularly unlucky runs Baker experienced at the final table.

Pretty unlucky start for @audavidb chip leader out in 4 hands.

Lost a flip, then lost AA vs Steve Zolotow AK

Newsflash: poker is a game where variance plays a role.

Joey Weissman needed some help several times in this event. He scored five double-ups, including two heads-up against Adam Hendrix, to take the title.

When play did reach heads up, Hendrix actually held a 6 to 1 chip advantage over Weissman. But those big all-in wins turned the tide and he rallied, eventually scoring a USPO championship and $204,000

John Riordan topped two of the hottest names in poker on his way to this big win and $163,200 first-place money. High stakes regular Sean Perry took runner-up for $105,600.

Alex Foxen finished third for $72,000 in an event that produced 48 entries for a $480,000 prize pool. For Riordon, the win becomes one of the biggest of his career and this player from Florida now has four USPO cashes this summer.

Things certainly went McKeehen’s way in this tournament and a thrilling final hand highlighted the action. Battling three-handed with World Poker Tour regular Ray Qartomy and Ali Imsirovic, both moved all in and McKeehen made the call.

Imsirovic was down to a single big blind after losing a big coin flip the previous hand to Qartomy. He moved in with 10♣6♥ before McKeehen raised with J♥J♦.

Qartomy then moved all in himself with 5♠5♦ and McKeehen quickly called. The flop brought J♣2♠A♠ to give McKeehen a set. The turn of the J♠ finished off the win for McKeehen with quads. 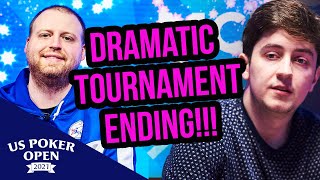 The USPO finish marked McKeehen’s first cash ever in the series and he took home $200,200. The 2015 WSOP Main Event champion now has almost $17 million in live poker tournament winnings.

For runner-up, Qartomy banked $146,300 and Imsirovic scored $100,100 for third. The win and later third-place finish vaulted McKeehen to the top of the USPO standings. The tournament produced 77 buy-ins for a $770,000 prize pool. Here’s a look at the final two hands.

Sam Soverel came into Day 2 as chip leader with almost half the chips in play. He continued to dominate when play resumed.

Soverel eventually finished off Jordan Cristos heads up for his first USPO win and $175,500. Now with $15 million in live tournament winnings, he has three USPO cashes this summer. The event featured 65 entries and $650,000 paid out to players.

The inaugural event produced the biggest field of the series so far. Jake Daniels topped a field of 95 entries for a $218,500 score.

This marks Daniels’ first USPO Open title and he now has $1.6 million in live tournament winnings. Shak won $152,000 for runner-up.

Looking at events ahead

Plenty of action remains in the US Poker Open in the coming week with six more events on the schedule. Day 2 of Event 7: $10,000 No Limit Hold’em plays out today with Andrew Lichtenberger leading the final table.

Also among those returning are Shak, Foxen, Brock Wilson, Jared Jaffee, and David Peters. The champion wins $217,800 and the tournament has eclipsed the field for the opening event.

Plenty of high rollers should be out in force for those two. The series is the first featuring fantasy gaming from SuperDraft and USPoker recently took a look at this new gaming option.

All final table action can be seen on the PokerGO app. Here’s a look at the remaining events: