There seems to be no slowing down Phil Hellmuth on PokerGO’s High Stakes Duel. The Poker Brat will be back at the tables this Wednesday, taking on high-stakes legend Tom Dwan in the PokerGO Studio in Las Vegas.

The match, Round III Part 2, comes after Hellmuth dispatched FOX Sports host Nick Wright in late July. Dwan should be an even more challenging opponent.

Can Hellmuth cash in again? Plenty of poker fans will be watching to see if he can make it eight wins in a row.

“Playing Tom Dwan is a massive challenge,” Hellmuth told USPoker. “Tom is one of the biggest winners, cash on cash, in the history of poker. He has crushed High Stakes Poker harder than anyone else. He is one of the most talented poker players in history.

“Dwan has no fear – he can make great calls and great moves at any given time. At age 35, he is already a legend.”

What to expect from the matchup

Hellmuth’s win streak has made plenty of headlines in the poker world. Many didn’t give him much of a chance in the series initially, but he’s proven the naysayers wrong.

Now with seven straight wins under his belt, it seems the show has seemingly become synonymous with the 15-time World Series of Poker bracelet winner.

The upcoming match offers an interesting duel of the “old school” pro versus the young online poker pro. Dwan came up as an online poker phenomenon and also has $4.8 million in live tournament winnings.

Also a regular in some of the biggest cash games in the world, he’s featured prominently on shows like High Stakes Poker. The popular book Ship It Holla Ballas! Even featured Dwan’s rise as an online legend. He and a group of friends played at some of the biggest stakes and traveled the world during the height of the poker boom.

Hellmuth has argued that many of the online pros don’t have the real-world poker skills for a series like HSD. Despite that, he knows beating Dwan won’t be easy. Here’s a look at the matchup details. 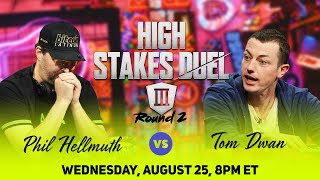 How Hellmuth got to this point

Hellmuth continued to shine on July 29, notching yet another heads-up win. This time, Wright was the most recent victim.

Wright battled gamely and felt as a recreational player, he might do some things Hellmuth might not expect. He found some success early, using an approach where he never offered any information on his hands. That strategy and some aggressive play was able to get Hellmuth off his game at times.

Again, however, Hellmuth overcame and eventually closed out Wright. Hellmuth added another $50,000 after already winning $700,000 in three straight wins over Antonio Esfandiari and three straight over Daniel Negreanu.

The Poker Brat was complimentary when the six-hour match with Wright came to an end.

“Nick bluffed my shoes off, and kept me completely off balance by lying about his hands afterward,” Hellmuth noted on Twitter. “After watching the match just now: my eyes are wide open! Good match Nick, well played!”

What to expect afterward

If he wins, Hellmuth could cash out afterward. Dwan would have the first chance at a rematch at the $200,000 buy-in level.

If Hellmuth were to win, and Dwan choose not to rematch, someone else could step up at the $200,000 level. If Dwan wins, Hellmuth has the first right to a rematch. Much of this may depend on the upcoming WSOP in Las Vegas, which also starts in late September.

Hellmuth-Dwan should make for some interesting poker as two big poker brains wage some mental warfare.