The battle is on. Phil Hellmuth and Daniel Negreanu are back at the PokerGO Studio on Wednesday for a special Cinco de Mayo edition of High Stakes Duel.

Negreanu will be looking to exact a bit of revenge after Hellmuth staged a massive rally in the first heads-up match. Hellmuth had been down to his last 3,000 chips at one point versus Negreanu’s 97,000.

Hellmuth took home $50,000 in the first event and now each player is putting up $100,000. It should be another interesting chapter in the growing number of heads-up challenges over the last couple years.

What to expect from the matchup

The first High Stakes Duel proved to be a fun viewing experience – even beyond the poker. There was plenty of chatter between the two and even a Hellmuth rant thrown in.

Many viewers may be asking what snack or meal Hellmuth will be breaking out? Mixing in a meal on stream has been a regular part of the Poker Brat’s schtick of late.

Against Negreanu, that meant digging into a nice chicken sandwich followed a mega bag of Sour Patch Kids. While it may be unknown how the cuisine affected his game, Hellmuth proved cagy to come back from such a huge deficit.

“With televised cash games, I keep on winning, winning, winning, and the younger generation doesn’t notice,” Hellmuth said afterward. “In fact, they just make fun of me. They want to ignore that I’ve won all these things.” 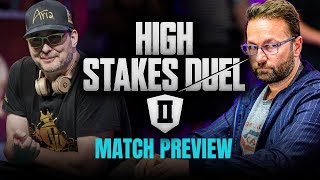 Hellmuth has shown real skills in these live heads-up battles. That included three wins over Antonio Esfandiari and dispatching Negreanu in late March. He’s credited his short stack skills for turning things around against Kid Poker.

In an event like this, it may be important to note that not many players have as much live heads-up experience as Hellmuth. He thrives in tournament-style, heads-up situations as his 15 World Series of Poker titles attest.

Playing out on Cinco de Mayo, viewers can expect a few holiday-related elements added to the stream. Here’s a look at the High Stakes Duel II details:

Getting back to the tables

The matchup kick starts a long stretch of poker for Negreanu and he seems pleased to be back at the grind. He outlined his upcoming poker schedule recently on Twitter.

LOTS of poker ahead for me.

Late May, all of June/July,

Bring on the grind. pic.twitter.com/M6PIyQzM9N

Doubters continue to play down Hellmuth’s skills, but his results speak for themselves. Walking away on the short end in the first meeting left a sour taste in Negreanu’s mouth. He’ll be focused and hoping to deliver a knockout blow if he builds a nice lead again.

“I love making fun of him, I love playing with him,” Negreanu noted in the PokerGO hype video of the event. “I definitely feel like I’m a favorite going into this match. I’ve been playing a lot of heads-up poker and have a good feel for it.”

Before the first match Negreanu also noted: “I would rematch Phil for eternity. There is no possible way I would say no to a rematch with Phil Hellmuth.”

Poker fans will find out on Wednesday which player will be calling for a rematch this time.