Online poker revenue finished out the summer strong and held solid results. The US market continues to expand and achieve year-over-year growth.

PokerStars, BetMGM/partypoker US, and WSOP.com continue to offer monthly tournament series alongside cash game promotions.  In the US, online poker is currently live and legal in the following states:

The Garden State online poker community remains consistent. The New Jersey online poker scene has produced over $2 million each month throughout the summer. In total, the state brought in $2.2 million in August as reported by the New Jersey Division of Gaming Enforcement (NJDGE).

WSOP.com held the number one spot in the state for the fourth consecutive month. However, the site saw a small month-over-month decrease. WSOP.com reported $849,612 in revenue, down from July’s $997,213.

After a month of being in third place, BetMGM regained second place and reported $724,709. The company is currently running the Online Championships series.

PokerStars fell back to third place and reported $632,332. The site recently launched a pathway to a Platinum Pass for US online players, which may add to revenue totals in coming months.

In the New Jersey live poker scene, only three rooms are open in Atlantic City including:

No casinos have announced plans for guaranteed multi-day live events yet. However, Borgata insiders have made mention of a live series returning to the casino this January. 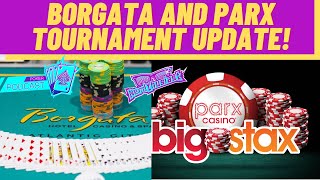 New Jersey online casinos reported $131.4 million in August revenue, a 16.1% increase year over year. The Borgata/BetMGM casino brand hit over $40 million again for the third month in a row.

The company reported $41.8 million in overall iGaming for the month. The site has remained No. 1 in the state for 17 straight months.

Golden Nugget slightly held on to second in overall iGaming with $31.3 million. Resorts stood hot on the Nugget’s heels with $30.7 million.

According to the NJDGE, overall gaming revenue reported by casino, racetracks, and partners was $470.7 million for the month. Year over year, that’s a 10.1% increase from $427.7 million in August 2021.Gaming taxes represent 8% of taxable casino gross revenue and 15% of Internet gaming gross revenue.

For yet another month, the Keystone State holds the top spot in the US for legal online poker. Pennsylvania held strong month over month and reported $2.7 million in August, according to the Pennsylvania Gaming Control Board (PGCB). The commonwealth currently has three online poker companies running games in state:

PokerStars continues as the top site in the state and brought in $1.6 million in August. WSOP.com came in second with $635,964. The platform isn’t part of the combined player pool in New Jersey and Nevada, but is hosting six online official bracelet events through October.

iGaming reaches another record in PA

The Keystone state set another iGaming record, reporting $107.1 million in total gross revenue.  This was a 20.81% year-over-year increase.

State combined total revenue generated from all forms of gaming along with fantasy contests during August was $425 million. This is an increase of 4.2% compared to August 2021 revenue.

Rivers Pittsburgh’s record-setting bad beat jackpot was finally hit for over $1.2 million. The Pennsylvania live scene continues to grow in the tristate area.

Michigan is slowly becoming a powerhouse in the online poker and iGaming scene. According to the Michigan Gaming Control Board (MGCB), online casinos in the Wolverine State brought in $154.9 million in revenue for August, setting yet another new record.

Online poker revenue isn’t reported separately, but shows the game’s growth in the state. The report includes the combination of poker and online gaming. There are now three online poker operators including:

Players are still waiting on a merger with other state poker platforms in Nevada, New Jersey, and Delaware.

BetMGM, PokerStars, and WSOP.com continue producing solid tournament series in Michigan. Revenue numbers are strong as well. Internet gaming gross receipts for August  were $130.9 million, up 3.4% from $126.6 million in July.

Online poker revenue isn’t reported separately, so the number is reflected in the combined iGaming results.

Gaming operators in total produced $25.3 million in tax revenue and local share to the state including:

Delaware poker down in August

Online poker in Delaware shrunk month over month. The state reported $37,168  in August, slightly down from the $43,943 in July.

For the sixth month in a row, the state reported online gaming revenue of over $1 million. According to the Delaware Lottery, iGaming showed a net of over $1.29 million – again the best of 2022. New player registrations had its second best month with 1,152.

Delaware Park grabbed the top spot again and showed its best month of 2022. The operator reported $27,019 in August and has held the top spot every month in 2022.

Delaware Park is the only live poker room open in the state. The casino is currently hiring and paying out bonuses for new employees.