The online poker boom continues and some live elements of the game are also returning. For fans, that includes huge online tournament series options as well as a favorite televised poker show returning.

Checking in on the Negreanu-Polk showdown

For those who may not know, the high-stakes matchup between Doug Polk and Daniel Negreanu is underway. The action kicked off Nov. 11 with 200 hands of live play streamed on PokerGO.

While Polk may have the upper hand online, Negreanu came out on top in that first round. However, after moving online to WSOP.com, Doug Polk took command and led the series up $101,793. The two were expected to battle again on Monday as well. Poker fans can find complete coverage at the USPoker Negreanu-Polk Central landing page. Readers will find:

Speaking of PokerGO, it looks like the poker streaming service is bringing back an old favorite. High Stakes Poker is set to return to the platform in December.

The show has been filming in the PokerGO Studio at Aria in Las Vegas recently. High stakes pro Tom Dwan spilled the beans about the return on Twitter.

Some of those participating in the action included Phil Hellmuth, Ben Lamb, Phil Ivey, Jean-Robert Bellande, Bryn Kenney, and others.

For those who don’t remember, High Stakes Poker was one of the first televised cash games. The show debuted in 2006 on GSN (Game Show Network) and ran until 2011.

The series featured AJ Benza and Gabe Kaplan calling the action with Kara Scott later stepping in for Benza. Norm Macdonald replaced Kaplan in the show’s final season and original episodes are available on PokerGO. 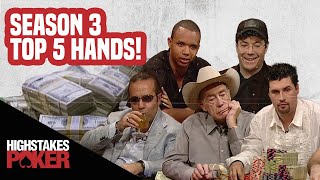 Fans loved the action and seeing some of the biggest names in the game like those including Doyle Brunson, Antonio Esfandiari, Mike Matusow, and others.

Hundreds of thousands of dollars exchanged hands in a single night. Viewers loved seeing how these card sharks played their hands for such big sums.

The banter among players also stood out and brought viewers back to check out the action.

The show was filmed at the Palms Casino, Golden Nugget Casino, and South Point Casino. Fans are in luck with the high stakes returning after being off the air for almost a decade. New poker episodes debut on PokerGO on Dec. 16 at 8 pm ET.

Bad beats – everybody has one. But not everyone wants to hear others’ tales of Aces cracked or sad runner-runner whatever cards.

The crew at the PokerStars blog recently decided to offer some advice on improving those tales of poker depression.

The site invited best-selling author and poker player Matthew Dicks to explain how to tell a good bad beat story. He advises players how to make that next bad beat less painful and more entertaining for others to hear.

Dicks offers some differing ideas on shifting the focus of a story about math and probabilities to more player-specific revelations.

“I used to think that player across the table was an idiot, but it turns out that I was the idiot,” he offers as an example.

Some humor and suspense also help. It’s a fun read and may have players rethinking those dull no limit narrative accounts.

Players outside states offering legal online poker may want to check out sweepstakes poker options. Global Poker is the biggest of those and continues to offer players massive tournament series.

The Eagle Cup is currently underway and runs through Nov. 22 with an overall 1.2 million Sweeps Coin guarantee. This virtual currency can be exchanged for real cash prizes and gift certificates.

The series features Low, Medium, and High events with 104 Sweeps Coin tournaments. Winners also win a trophy, Global swag, and qualify for the Tournament of Champions on Nov. 22.

That event awards a $5,000 package to play a live event representing Global Poker. A look at Sunday’s action shows what players are in store for at this site.

Players at the World Poker Tour’s ClubWPT sweepstakes poker site now have some extra incentive to get in the game. Last week the site unveiled the $200,000 ClubWPT TV Challenge.

The event allows players to go from online grinder to televised poker star. The challenge starts this month and will play down to six finalists. Those players will then compete for a $50,000 first-place prize at HyperX Esports Arena in Las Vegas.

“The World Poker Tour is pleased to give six players the opportunity of a lifetime to play at a WPT final table,” WPT Vice President of Online Services Jeremy Clemons said. “ClubWPT continues to expand its prize pools for our loyal players and the $50,000 first-place prize marks the largest in ClubWPT history.”

All final table players are guaranteed at least $10,000 and also receive a $3,000 Vegas travel package. The HyperX has been the home of WPT televised final tables since 2018-19 with seven champions crowned in the venue.

The new challenge highlights the tour’s continued transition to online poker. That has numerous events in partnership with partypoker over the last year. The tour recently announced the WPT Montreal is heading online this year.

“WPT’s online pivot continues heading into 2021 and this new initiative on ClubWPT will allow us to offer the same quality WPT experience online, similar to what players have come to expect from a live WPT event,” company CEO Adam Pliska said.

A federal appeals court heard arguments in the Wire Act case in June. That issue may be delayed further with the recent death of the presiding judge in the case.

The case may have a major impact on online casino gaming as the Department of Justice has argued the law applies to more than just sports betting. The gaming industry is hoping a decision further clarifies the issue.

A negative ruling for the industry would put interstate compacts in doubt. WSOP.com currently runs the only shared liquidity market in Nevada and New Jersey with 888poker in Delaware.

The site was awarded the record for “largest prize pool for an online poker tournament.” 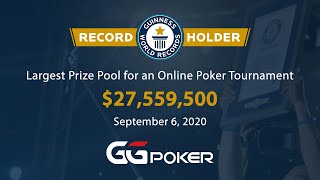